LILIENBERG: a place with history

Villa LILIENBERG with a view over Untersee was built in 1840 on a wonderfully situated estate above Untersee by the Prussian Baroness Caroline von Waldau and passed in 1848 to the Constance Baroness Betty von Fingerlin, a cousin of the later Emperor Napoleon III.

Also back then, LILIENBERG was used as an inspiring meeting place, where famous musicians, among others, came as house guests.

The decisive tea visit of the Reist couple took place on 21st April 1985 - as guests of Klara and Paul Bigliardi. Walter Reist, who had wanted to build a meeting place for entrepreneurs for some time, and Dr. Paul Bigliardi quickly agreed on a deal and sealed the purchase contract with a handshake. The LILIENBERG Entrepreneurs' Forum was inaugurated on 7th April 1989 as a meeting place for business, politics and society.

As a boutique conference centre, network and socio-political think tank, LILIENBERG is today pointing the way to the future. First and foremost, LILIENBERG is the ideal location for seminars and private events such as family celebrations or weddings. In the restaurant and on the sun terrace we serve culinary delights in a cosy atmosphere. You will enjoy a fantastic view of our beautiful park and over Untersee to the monastery island of Reichenau.

In addition, LILIENBERG hosts several events each year on a wide variety of current and relevant topics with personalities from business, politics and society. For our sponsors and friends the participation is included in the membership fee.

With its diverse possibilities for conferences, seminars and meetings, LILIENBERG is, last but not least, also a recognised think tank for companies, institutions and organisations of all kinds.

Regular presence in the media

Incidentally, the longer LILIENBERG is in existence, the more it is perceived by other organisations and institutions as a player that attracts a great deal of attention all round. And there are also regular reports about LILIENBERG in the media. The entrepreneur magazine LEADER for example, published a three-page interview with Daniel Anderes, CEO of LILIENBERG, in its February 2018 issue under the title "Focus on personalities who bear responsibility". 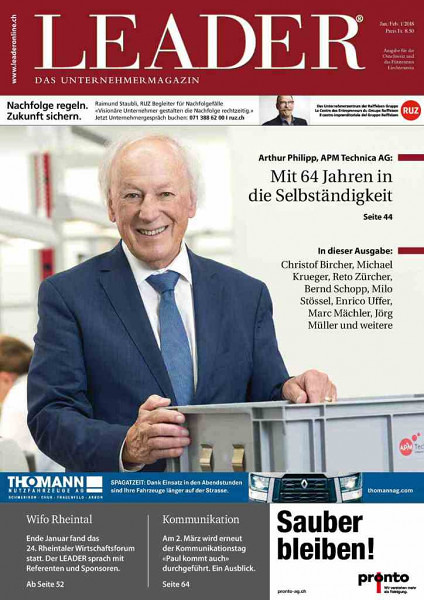 In mid-August 2019, the LEADER published a special supplement entitled "Lilienberg - 30 years of networking and think tank". This on the occasion of the 30th anniversary of LILIENBERG. The publication contains several articles and interviews worth reading as well as statements from speakers and customers.

LILIENBERG is also prominently featured in the business magazine "From Entrepreneurs for Entrepreneurs", with a guest author article by Daniel Anderes entitled "Behind the success of companies there are always people."